Starting from the cathedral, take Corso Saffi towards SE and shortly reach the bridge over the Lamone river. Embark on the route on the right bank that follows the path of the river park. The embankment is clean, well maintained and overlooking vegetable gardens and cultivated fields, and just a few meters to observe “from above” the city seeing bell towers and domes.

Soon, paying attention on the right of the path, with difficulty you can decipher the carved words on shaped stones. A few hundred meters ahead you will find one that looks well preserved … it shows the name of the underlying floodplain. Others maybe reported the name given to the areas that were submerged during periods of flood. After about 1.00 hours, on the right, a funerary monument of S. Barnaba is found, from 1902 of the Roman age, which is certainly part of a larger displaced necropolis, presumably along Via Faventina, which connected Faenza to Ravenna. This is a square construction (2.40 meters on each side) formed by parallelepiped blocks of “spungone”. Continuing after about 2.00am we reach the bridge on the Lamone that separates us from the village of Ronco where stands the church of S. Margherita and the cemetery where rests Father Daniele, a missionary assassinated in Peru in 1997.

Continue on the right bank, underpass the highway and shortly after you will find the church of Saldino on the right; continue on the asphalted road, always following the Lamone alternating with stretches on grass. Further ahead, cross the SP 302, paying attention, and take Via Fossolo always on the Lamone river park. A little further on we pass the Emilia-Romagna canal and soon after, in view of the railway bridge, the SP 20.

On our right, among the cultivated fields, we can see the Villa Spadina warehouse, already belonging to the Counts Severoli of Faenza, which was destroyed at the end of the 2nd World War. In 1851 Stefano Pelloni was killed in the villa’s rape, the bandit called “il Passatore” from the trade (ferryman) who carried out his father in nearby Boncellino. 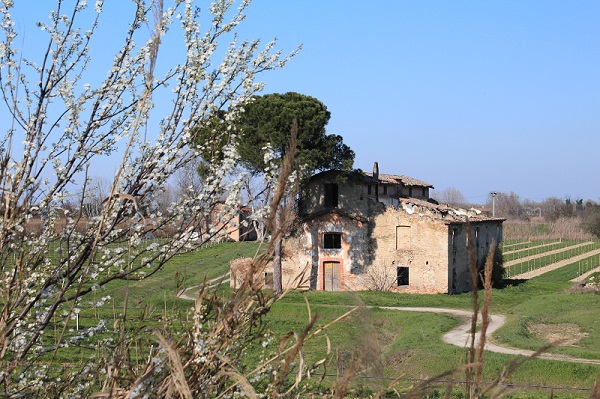 Proceeding ahead, the bell tower of the Boncellino church can be seen on the right beyond the left bank, while on the right some farms, a large horse farm, and after passing another iron bridge of the railway appears Palazzo S. Giacomo. From here, take a comfortable white carriage until you reach the bridge of the SP253 that goes over the Lamone near Bagnacavallo. Continue straight and always on a carriage you reach a narrow cycle and pedestrian bridge that leads to the village of Traversara. Head in the direction of NE passing the church, ahead on the right the cemetery and on Via Traversara in about 1.00 hours we reach Bagnacavallo and crossing the SP 88 you connect to the cycle-pedestrian track that corresponds to the terminal section of the 3rd stage. Giacomo seen by rival of the river. 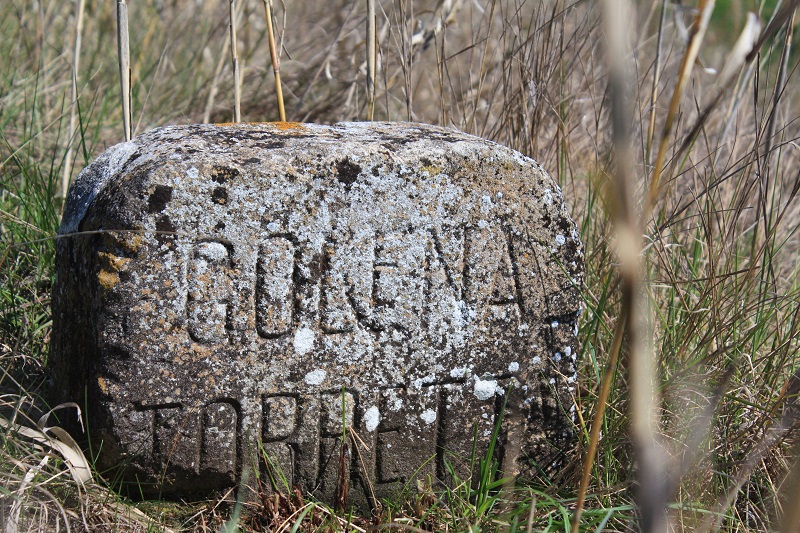 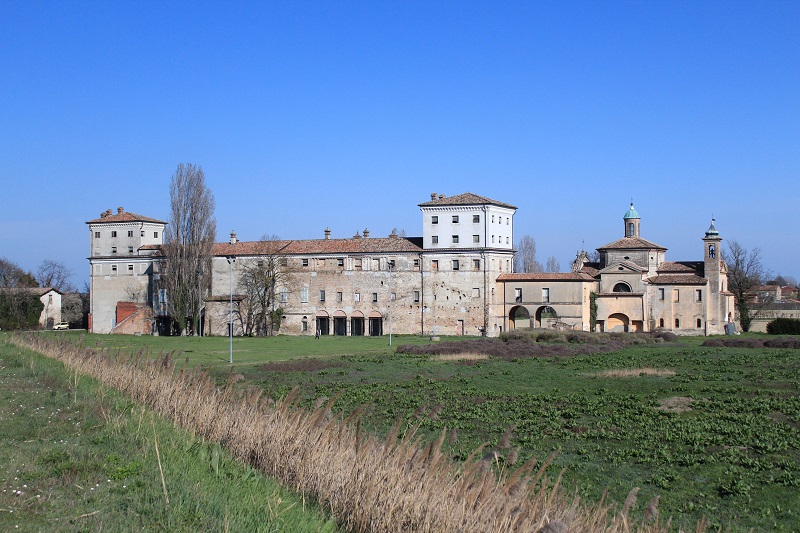 The “Parco Fluviale del Lamone” was chosen in the context of Oplà as a project financed by the municipality and soon in the pipeline.

We have been assisting for years in the growth of initiatives aimed at rediscovering ecological paths. The objectives range from the stimulation of ecological tourism in transit, among which the cycling tourism that is in rapid development. The course of the Lamone river, from the mouth of the Adriatic Sea, between Casal Borsetti and Marina Romea, up to the Apennines, and from the Apennines to the Adriatic. With its own embankments, it offers a viable pedestrian bike that touches many points of landscape, historical and archaeological, cultural, eno-gastronomic value. A project, “Lamone Bene Comune”, has realized in the years 2011/2013 meetings, conferences and printed that testify it. This can be integrated by promoting a “Lamone River Park”, whose “backbone” is a naturalistic cycle-pedestrian path, mostly on dirt embankments, which goes from Marina Romea / Casal Borsetti to reach the sources of the river. (the Piccolo 2014)

The funerary monument Roman cultural sphere of Roman age of republican period III / II century BC Lower portion of a square-plan structure with wall elements in rows of calcareous stone blocks, probably of the cuspidate “edicola” type, similar to the sarcophagous funerary monuments. In the internal area contained sepulchral remains and furnishing objects.

Found at the beginning of the twentieth century on the right bank of the Lamone, it was rebuilt and relocated near the original place of discovery. It could refer to a well-to-do personage whose sepulcher was part of a larger necropolis located along Via Faventina, the Roman consular that connected Rome with Ravenna. 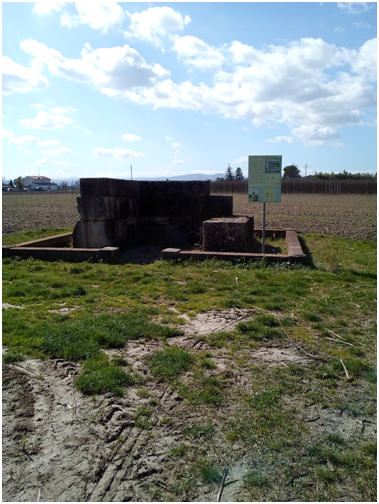 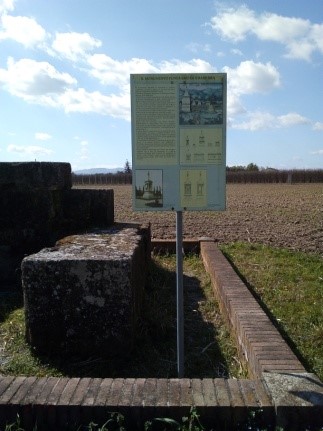 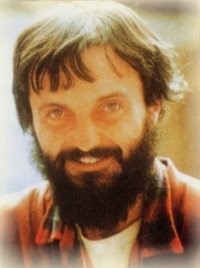 The process of beatification and canonization of the servant of God Father Daniele Badiali began March 20, 2010. The diocesan phase of the process ended on October 19, 2014. For more information: www.padredanielebadiali.it

The noble holiday of the Rasponi The Palazzo di San Giacomo is located in the territory of Russi near the right bank of the river Lamone about two kilometers from the town and is currently owned by the city. The first information on the building is quite fragmentary: from a parchment of the Canons Monastery of Porto in 1121 it is clear that in that year there was a church dedicated to St. James, while the first news of the castle is in a document of 28 October 1155. On May 15, 1156 Bishop Ramberto granted that place to the regular canons of S. Maria in Porto which in the 12th century. XV and XVI had a small monastery there. The ancient name of Raffanara distinguished the locality in reference to a castle that was destroyed in the fights between Faenza and Ravenna. The estate of Raffanara is purchased by Count Guido Carlo Rasponi, brother of the future Cardinal Cesare, in 1664. Thus, began the expansion of the old body of the building that will lead to the construction of the Palace of St. James, summer residence of the noble family Ravenna. The central door is surrounded by Istrian stone, surmounted by four shelves that support the balcony with a pot-bellied iron railing, while the balcony door is adorned with two Ionic marble columns and two pilasters. Above the arch is the emblem of the Rasponi with two crossed lion legs and surmounted by the head of the bandaged brunette and the crown. The interior decoration is, despite the impairments suffered, perhaps the largest painting cycle that has arrived in Romagna between the seventeenth and eighteenth centuries, at least on the front of private and noble decoration. The entire main floor is still frescoed today, while little remains of the ancient stucco fireplaces, apart from the rocaille fronts. The pictorial decorations follow each other in the years between the end of the seventeenth century and the first half of the eighteenth century. The Rasponi gallery (the project is attested as early as 1688) bears the signatures of Filippo Pasquali, of the workshop of Carlo Cignani, and of Cesare Pronti. On the death of Guido Carlo, his son Filippo continues the construction and decoration of the main floor between 1696 and 1698. On the death of Filippo, the inheritance of the palace passes to his son Cesare who completes the decorations many years after the death of father (approximately in 1750). 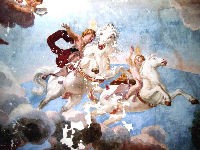 The church next to the palace, dedicated to St. James the Apostle, was built between 1750 and 1774 by the architect Cosimo Morelli on a previous project by Antonio Torreggiani who, in turn, had worked on a design by Arch.romano Nicola Salvi. Until the 80s of the last Century, the church was adorned with three blades attributed to Cristoforo Unterperger, now kept at the Faenza Seminary.The property of the palace passed in 1947 to the Seminary in Faenza and in 1975 to the Municipality of Russi. 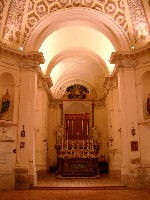 The church of San Giacomo Apostolo, connected by a small pass inside the homonymous palace that belonged to the noble Rasponi family of Ravenna, was built starting around 1750 at the behest of the Marquis Cesare Rasponi and completed in 1774.
In 1780 the Archduke of Milan Ferdinando, son of Empress Maria Theresa of Austria, appointed Governor General of the Hapsburg Lombardy, stayed at the Palazzo di San Giacomo together with his wife Beatrice d’Este and glorified the beauty of the church, emphasizing how it resembled the Church that the Arch. Piermarini was building in the Royal Villa of Monza, which later became the royal palace of the Savoy, king of Italy. 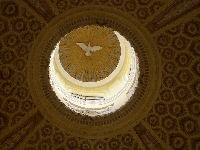 The church of San Giacomo was adorned until the 80s of the twentieth century with three paintings attributed to Cristoforo Utemperger today preserved at the Diocesan Museum of Faenza.

Archaeological complex of the Roman Villa

In the III century a.C. the Roman conquest occupies the south-eastern part of our region (Ariminum). After the construction of the Via Emilia (187 a.C.), we proceeded to the rational division of the agricultural territory with the centuriation that consisted in the formation of a network consisting of decumani (the maximum decuman was the Via Emilia) and by hinges. Each square of 50 was subdivided into smaller square units until the smallest, the centuria, which measured 710 meters on the side, where they could reside at most two peasant families. The production system was based on the presence of the Villa Rustica, as testified by the agronomist Catone (2nd century BC). The Villa di Russi, the best known and most conserved in our region, responded to the characteristics of the Villa Rustica di Cato: it stood along a navigable watercourse (perhaps the Vatrenus, the present Santerno, or a branch of the Lamone river); near an important road, the Faventia-Ravenna axis which in turn was connected to the Salara (Bologna-Ravenna); it was located near the sea and near Ravenna (a large urban center with the port for the Roman fleet). Until the first century B.C. such rustic villas were modest small country houses. Cereals, wine and fruit were produced, and a few farmyard animals, pigs, cattle, sheep and goats were reared. The production was enough for the survival of the family and the surplus flowed into a modest local trade. In the Augustan period, with the construction of the port of Classe and the consequent enlargement of the urban center of Ravenna, which required a consistent and continuous supply from the surrounding countryside, the Villa di Russi expanded considerably in its structures, as is clear from the analysis of the excavations.

History of the excavations

The archaeological site was highlighted, casually, for the first time in 1938 during the excavations in a clay quarry. At a depth of 11 meters from the countryside level, traces of thermal plants were found that were subsequently covered due to the war. In 1953 the new excavation campaign began, followed by many others, not yet completed, which brought out the central part of the Villa.
Archaeological finds at the Roman Villa
The Roman Villa is composed of the Dominus house and La Pars Rustica. It seems evident that the complex of Russians is a good example of those rustic villas that were very important for the process of romanization of the area with their productive, economic and cultural peculiarity.
OPENING HOURS
from Monday to Saturday from 9 to one hour before sunset; Sunday from 14 to one hour before sunset (the ticket office closes half an hour earlier). Closed: December 25th, January 1st, May 1st.Ticket: full price € 2, reduced € 1.00Admission to museums, monuments, galleries and archaeological areas of the state is free for all citizens of the European Union, under the age of 18 and over 65.The ticket is reduced by 50% for young people aged between 18 and 25 as well as for permanent teachers in Italian state schools. Free admission is also allowed to journalists and to particular categories of students or teachers.Info: tel. 0544 581357 Museums in the Municipality of Russi 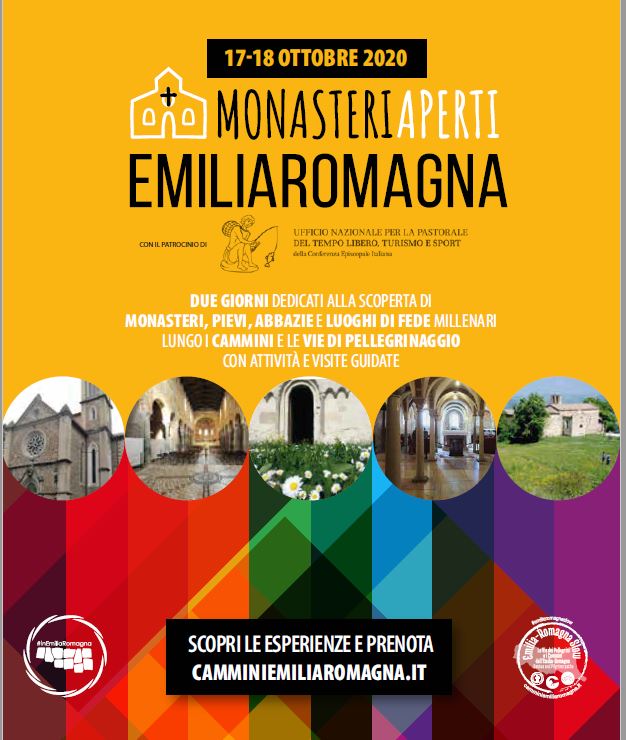